5 Notable Blockchain Platforms You Need To Know About in 2021

Disclaimer: This article does not endorse or promote any of the projects, tokens, or other entities mentioned. We encourage you to do further research on any token or project before getting involved. 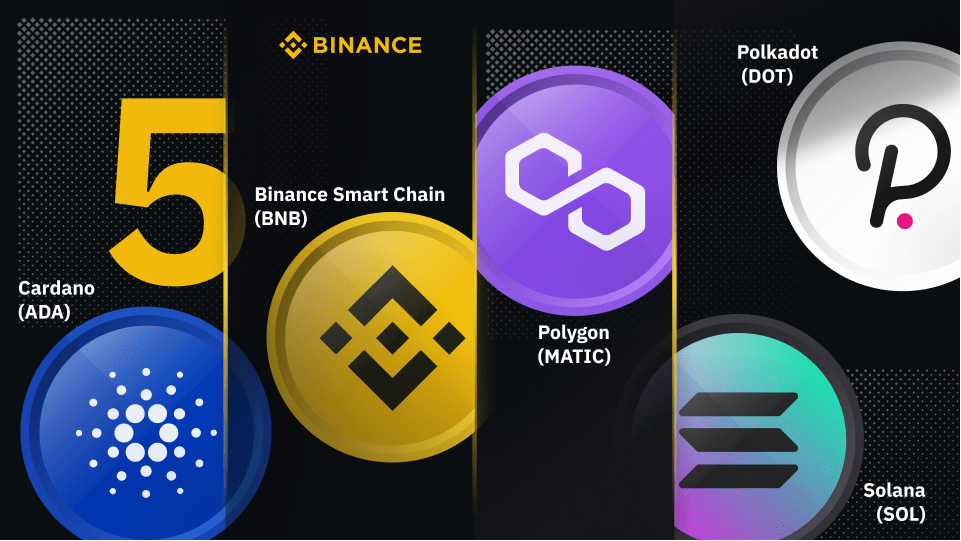 Cryptocurrency’s rise to a trillion-dollar industry in 2021 has paved the way for the emergence of more blockchain platforms alongside the ever-dominant Bitcoin and Ethereum. At the beginning of this year, Bitcoin, the world’s top cryptocurrency, accounted for around 70% of the industry’s total market capitalization, according to data from CoinMarketCap. Ethereum, the second-biggest crypto and the top blockchain platform, accounted for 13%. For most of crypto history, Bitcoin and Ethereum have accounted for around 65% to 85% of total market valuation.

In recent weeks and months, the level of dominance of Bitcoin and Ethereum has been at the lower end of that range. The growth of newer blockchain platforms has been a major factor of this change in the crypto landscape. From a macro standpoint, the record highs of Bitcoin and Ethereum this year have lifted the crypto industry in general, driving renewed interest in numerous blockchain projects as traders constantly search for the next big performers in their portfolios.

In Bitcoin’s case, unprecedented interest, investments, and bullish forecasts from institutions like multinational companies, hedge funds, and even governments have fueled the top crypto’s bullish run for most of the year. In Ethereum’s case, industry-wide changes like the explosive growth of DeFi (decentralized finance), NFTs (non-fungible tokens) and other notable innovations catalysed their renewed dominance as the platform of choice for blockchain apps. However, the increase in network activity for Ethereum has also led to new problems and challenges to their capacity, such as record-high fees, slow transaction speeds, and more.

While Ethereum’s core developers have been tirelessly improving the blockchain’s mechanics, the platform’s challenges opened new opportunities for competitor blockchains to rise to the occasion and generate additional business from crypto projects worldwide. Most of these emerging blockchains offer Ethereum compatibility alongside a bevy of enhancements, such as faster transactions, quicker processing times and other advantages, making it easy for developers to switch to these new platforms or at least alternate between Ethereum and its rivals.

As a result, these new blockchain platforms have risen in the cryptocurrency ranks, driven by their growing communities, unique selling propositions, and increase in valuations. In this article, we give a quick look at some of the notable blockchain platforms that will likely play crucial roles in the growth and future of the industry.

While dozens of blockchain platforms have recorded significant growth in 2021, we’ll focus on the platforms that have risen in the crypto market cap ranks and made substantial progress with their technology and communities.

We begin the list with a blockchain platform that is actually supplementary to Ethereum’s growth. Polygon, which started out as a Binance Launchpad project named Matic in April 2019, offers a protocol for creating Ethereum-compatible blockchain networks. The Polygon Network serves as an Ethereum sidechain, or a parallel chain connected to Ethereum, that offers faster speeds and very low costs. The platform allows developers to easily launch Ethereum-compatible scaling solutions and stand-alone blockchains as part of a network of interconnecting blockchains.

Polygon, which calls itself Ethereum’s Internet of Blockchains, is now used by many popular DeFi apps such as Aave, Curve, and Sushi, as well as native applications like QuickSwap and Slingshot. The platform also benefits from an investment and endorsement from well-known entrepreneur Mark Cuban, who noted that the network’s user base is “growing exponentially.”

The Polygon (MATIC) token is used to pay for gas fees on its namesake network and participate in the protocol’s governance.

Notable integrations with Solana this year include the project’s tie-up with Chainlink at the start of 2021 and chat app Kik’s migration of its Kin tokens to Solana last year. In June, Solana raised $314 million from noted Silicon Valley investor Andressen Horowitz and Polychain Capital, which sees the project as a complement to Ethereum.

The Solana (SOL) token works as the blockchain’s utility token, used for transaction fees related to transfers and the use of smart contracts. While SOL only started trading in notable exchanges in April 2020, the blockchain was actually created way back in 2017.

Similar to the first two blockchains mentioned in this article, Polkadot aims to interconnect multiple blockchains into one universal network. What sets Polkadot apart is its focus on building infrastructure for Web 3.0, the evolution of Internet technology through the use of machine learning and artificial intelligence. Polkadot, led by Ethereum co-founder Gavin Wood, connects parachains (parallel blockchains) to the main Relay Chain, allowing for the easy exchange of information at all times.

Earlier this year, institutional investors such as Goldman Sachs, ICAP, JPMorgan, and UBS have reportedly bought shares in Polkadot’s exchange-traded product (ETP), which is listed on the SIX Swiss Exchange. While this doesn’t mean that the institutions own DOT tokens, the ETP investment signifies interest in Polkadot’s future.

While Polkadot’s YTD growth pales in comparison to the previous two projects, it’s important to note that Polkadot’s market cap was already between $3 billion and $5 billion in the first four months when it started trading in September 2020.

One of the earlier blockchain platforms in the list, Cardano was created in 2015 as a third-generation, general-purpose blockchain that emphasizes scalability and an eco-friendly Proof-of-Stake system. Designed based on peer-reviewed academic research, Cardano is developed mainly by the technology company Input Output Hong Kong (IOHK), founded by Charles Hoskinson, who worked on Ethereum in its early days. Recently, Cardano completed a hard fork upgrade that paves the way for smart contract integrations on the blockchain.

Cardano is perceived as one of the main rival blockchains to Ethereum, driving its rise to the Top 5 in cryptocurrency rankings. Driven by retail investment and corporate partnerships such as its recent tie-up with Swiss blockchain firm Lykke Corp, blockchain activity on Cardano rose from 418,000 transactions at the start of the year to as much as 1.6 million in May. Nevertheless, Cardano’s proponents are taking a long-term view on its development, with a roadmap that extends all the way to 2025.

Binance Smart Chain (BSC) is a fairly recent smart contract blockchain, introduced in late August 2020. BSC was created as a parallel blockchain to Binance Chain, which launched in April 2020 to facilitate decentralized trading. Before BNB transitioned into being the native token of Binance Chain, it was an ERC-20 token created in 2017 alongside the market-leading exchange Binance.

BSC boasts smart contract functionality and compatibility with the Ethereum Virtual Machine (EVM), combined with the blockchain’s high throughput and 3-second block times. This means that Ethereum-native applications can conveniently switch over to BSC and take advantage of the faster speeds and lower fees.

Combined with Ethereum's recent network challenges, BSC’s attributes have made it an attractive option for blockchain applications to easily switch over. BSC processed 11.8 million transactions in a day at its peak, multiple times the maximum volume on Ethereum. As a crypto asset, BNB rose to as high as Top 3 in the crypto rankings, driven by the combination of BSC’s momentum, the growing number of use cases for the token, and its use as a utility token on the Binance exchange, the largest exchange in the world by trading volume, among other factors.

With the ongoing evolution of the crypto industry from default reliance on a few dominating blockchains to a surplus of emerging platforms, this is an exciting time to develop, grow, and support your blockchain of choice. One of the central values of the crypto industry is an individual’s freedom to choose which blockchain systems they want to back. You can be part of a blockchain project’s growth by doing the following:

1. Participate in a project’s community as a builder

The most direct way you can support the future of your project is to become an active participant in developing its underlying blockchain technology. While this may seem daunting if you’re not an innate developer, the open-source nature of many blockchain projects means that you can always start brushing up your knowledge on a project’s technology. Many blockchain developers began their journey as self-taught believers who learned more about a project and then found a way to contribute to the growth of its tech infrastructure.

2. Explore more use cases for the project you support

Supporting a blockchain project goes beyond helping out with the technical aspects of its development. Finding new applications for a blockchain is just as important as building the platform. As a participant, even a non-technical one, you can have a key role in expanding your project’s ecosystem by finding ways to apply the technology to as many use cases as possible. As a proponent of your project, you have the power to make a case on why your blockchain would work best as the platform for a specific utility or application.

3. Help your project’s economy by buying, using, trading, and promoting its token.

A healthy token economy plays a big role in growing a blockchain project. Simply put, if your project has more people involved in the process of using its token through economic activities like buying, trading, staking, and more, the project’s economic health becomes more active and robust. Promoting your project’s token also allows you to earn an income while having an active role in influencing the future of your project. You can easily find major blockchain projects listed on leading cryptocurrency exchanges like Binance.com, where you can buy and trade tokens while taking advantage of the platform’s high volumes for your token.

The statements made in this article are not investment advice and should not be interpreted as such. All investments are subject to high market risk, so please make your investments very cautiously and conduct further research on your own before acquiring any crypto token or investing in any crypto project. Furthermore, this article does not endorse or promote any of the projects, tokens, or other entities mentioned therein.